"To Err Is Human": Errata and Updates from My Books

One of my favorite quotes is "No one who cannot rejoice in the discovery of his own mistakes deserves to be called a scholar."*

In the spirit of this quote, I post the below errata (including typographical errors) from my books and other publications. Some of the below, however, are not corrections of errors, but rather updates based on more recent findings.

From Swamp Pop: Cajun and Creole Rhythm and Blues (1996): 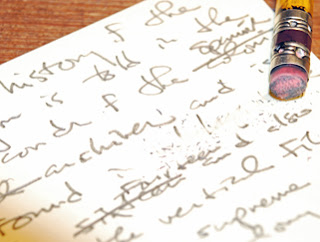 ~ Page 65, "During the late 1960s Fender teamed up with Joe Barry and went on in the mid-'70s to record such enduring swamp pop classics as ‘Before the Next Teardrop Falls’ and ‘Wasted Days and Wasted Nights’ (the latter covered by Johnnie Allan in alternating English and Cajun French lyrics).”

Correction: "Latter" should be "former".

Correction: Cookie did not sing vocals on "Betty and Dupree"; rather, his bandmate Shelton Dunaway handled the vocals.

~ N.p., regarding the passage:

"He [J. D. Miller] played his first dance with Joseph Falcon and his Silver Bell Band which was playing at the Cow Island nightclub that lacked an electrified sound system. Although the group was billed as 'string' band, Miller recalls that it featured the Breaux Brothers, traditional Cajun musicians."

Update: I cannot locate the source of my statement that Miller played with Joseph Falcon and his Silver Bell Band. As such, I believe the passage in question should read:

"He played his first dance at a Cow Island nightclub that lacked an electrified sound system. Although the group was billed as 'string' band, Miller recalls that it featured the Breaux Brothers, traditional Cajun musicians."

From The Cajuns: Americanization of a People (2003):

~ Page xi, "Regardless, when I visited my Cajun grandparents on Crochet Street in Opelousas, I heard Cajun French."

Correction: "Crochet" should be "Crouchet."
~ Page xvii, I state that Cajuns were known to be reviled by local blacks as "Acadian n*****s". On closer examination, however, I see that the original 19th-century quote states, "the n******, when they want to express contempt for one of their own race, call him [a fellow black person] an Acadian n*****." In other words, blacks used this pejorative as a black-on-black insult, not as an anti-Cajun insult or expression of perceived Cajun non-whiteness. See A.R.W. [Alfred Rudolph Waud], "Acadians of Louisiana," Harper's Weekly, 20 October 1866, p. 670.
~ Page 121, "And in the 1956 film Bayou . . . Peter Graves battles a villainous south Louisiana rival for a Cajun belle played by scantily clad Italian starlet Lita Milan."
Correction: Despite her ethnic-sounding name (a pseudonym, it turns out), Lita Milan was not "Italian" but rather a Brooklyn-born American actress of Hungarian-Polish descent — real name Iris Menshell.
~ Passim, update: Because of changing views about race and racism I have as of spring 2021 asked my publisher, University Press of Mississippi, to obscure all instances of "the N word" in this book by using asterisks, dashes, or blank spaces. The word in question appears in pre-spring 2021 editions solely when the book quoted or cited racially offensive historical and archival material. Although printed in an academic context — that is, in a book based closely on my Ph.D. dissertation in History and published by a peer-reviewed academic press — future editions of the book will obscure the offensive word.

From Tabasco: An Illustrated History (2007):

The below revisions will appear in the 2nd edition of this book, tentatively to be published in 2019:

~ Page 34, "The plan called for lopping off the brick tower's third-floor lookout (an alteration that was never carried out)."

Update: The discovery of a previously unknown 1885 photograph of the structure in question — the original Tabasco Sauce factory — reveals that it began as a small one-story building and only later (probably after E. McIlhenny's death in 1890) became a much larger building with a tower. As such, the "plan" in question was apparently not to lop off the third floor of the brick tower, but to build a brick tower in the first place — a tower that in execution grew from two stories to three.

~ Page 37, "Edmund originally called his condiment 'Petite Anse Sauce,' but he changed the trademark after Judge Avery objected to this use of his plantation’s name. As a result, Edmund rechristened his product with the trademark 'Tabasco.'" . . .

Update: The discovery of a previously unknown letter abstract book belonging to E. McIlhenny not only confirmed that McIlhenny at one time called Tabasco Sauce by the name "Petite Anse Sauce," but clarified the chronology surrounding the early name change. In short, the book, in which McIlhenny wrote synopses of his outgoing mail, revealed that McIlhenny first used the brand name Tabasco Sauce, then changed it to Petite Anse Sauce, then returned to calling it Tabasco Sauce — the name that has been used ever since. All this occurred over a short period in 1868, the sauce's inaugural year as a commercial product.

~ Page 37, "From there steamboats carried it down Bayou Teche, across several coastal bays, against the current up Bayou Plaquemines, and down the Mississippi to New Orleans."

Update: New research indicates this is not the route that these steamboats would have followed. Rather, they would have taken a solely inland river route: down Bayou Teche and the Lower Atchafalaya River; up the Atchafalaya River proper; over the massive Atchafalaya Swamp through Old River; and finally down the Mississippi River to New Orleans.

Correction: It is more correct to refer to the Fishes as "northern relatives" of the Averys and McIlhennys, rather than "family friends."

Update: It is now known this not a reference to Winston Churchill, the future British prime minister, but to the American novelist of the same name.

Update: I later found the child in this image to be Edward's younger brother, Rufus Avery McIlhenny. (An original print of the image bears the true identification; the annotation is by Mary Eliza Avery McIlhenny, Edward and Rufus' mother.)

Correction: This film was actually released a year earlier, in 1900.

From Cajuns and Their Acadian Ancestors: A Young Reader's History (2008):

~ Page 29, "The next year, a group of about three hundred exiles arrived in Louisiana under the guidance of a daring Acadian leader named Joseph Broussard did Beausoleil."

Correction: "About three hundred" should be "about two hundred".

From Teche: A History of Louisiana's Most Famous Bayou (2016):

~ Unnumbered page at beginning of book, on map of middle Teche region ("from Parks downstream to Franklin"), "Île Piquant".

Correction: The placename "Île Piquant" should be spelled "Île Piquante" (with an -e on the end of the second word) because "Île" is feminine in French and thus its adjective should correspond in gender. The placename does, however, sometimes appear in historical records as "Île Piquant."

Correction: "Alfred" should be "Albert". Same goes for his index entry (page 245). Also, to convey proper pronunciation Dieudonne should be rendered "Dieudonné" (with an accent over the final letter).

~ Page 18, "About a mile south of the Levant-St. John refinery lies St. Martinville."

Update: Masse's succession is mentioned in Spanish judicial records of January 1785, thus explaining my assertion that Masse died "around 1785." I observed in my end notes, however, that "Donald J. Arceneaux has determined that Masse died after February 1772 but before January 1773" (see page 210, note 15). While I chose to defer to the judicial records, Donald has since pointed out that genealogist Winston De Ville found reference to Masse's succession in a document from 2 December 1772 — indicating that Masse died sometime before that date. So the phrase in question should read "apparently unaware of Masse's death around 1772. . . ." Source: Winston De Ville, Mississippi Valley Mélange, Volume 2 (Ville Platte, La.: Winston De Ville, 1996), page 39.

Correction: The word "island" should be "inland".

~ Page 86, "Union map of the site of the Battle of Ft. Bisland, 1863, fought on both sites of the Teche near present-day Calumet."

Correction: "both sites" should be "both sides".

Correction: "curtail" should be "curtain".

~ Page 223, regarding the source of "The Passing of Harry Mahoney, Negro Politician of Radical Days":

Update: In Endnote 18 of Chapter 4 I note that one of my sources, “The Passing of Harry Mahoney, Negro Politician of Radical Days,” is from a "typewritten transcript . . . of [an] article from [an] unidentified New Orleans newspaper." Researcher Judy Riffel has found, however, that the article originally appeared in the (New Orleans, La.) Times-Democrat, 28 September 1913, page 20. Despite the article's title, it is not an obituary, but a reference to Mahoney's ousting from office. (Mahoney died three years later, in 1916.)